You wowed the crowd today with your Zenit’s outfit from the morning activity (football match challenge), what was it? Did you try to impress the crowd? And why the T-shirt had the number 28 on it?

Well, I’m a big football fun in general and this morning the club [FC Zenit] was so kind to give me a T-shirt with my name on it. I was very honored. I thought that warming up in this T-shirt would be a nice gesture. It was really nice playing with the guys this morning. And regarding the number: I was born on the 28th of June, so that’s why there is this number 28 on the T-shirt.

Could you elaborate on your attitude to football a little bit more. Russian national team play football during the Fed Cup to warm-up, what about the Croatian team?

In Croatia football is very big. Last season I asked my coaches if we could play football a little bit to warm-up, so sometimes we play. It’s fun and it’s good to change things up a little bit with other sports.

She [Kristie Ahn] is a cheeky opponent, she doesn’t give a lot of rhythm, so at the beginning I was struggling a little bit, but then I got into the match and I think I was playing much better in the second set than in the first one. 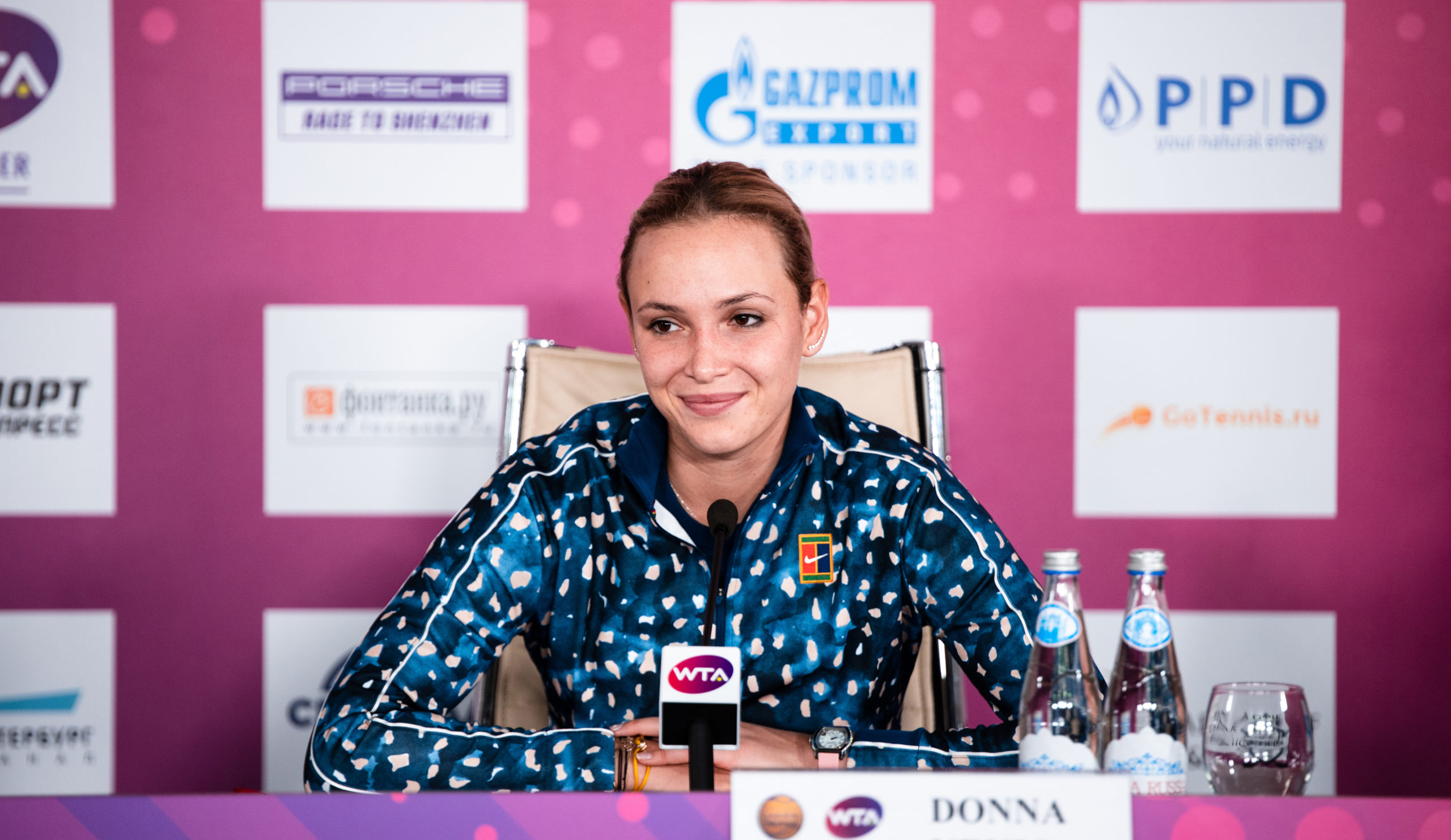 Do you have Russians fans and do they give you some presents?

I haven’t got any presents yet, but I think a lot of people are supporting me here. The crowd supported me a lot today, they were happy to see me back in St. Petersburg in general. At the draw ceremony when my name was announced they were cheering a lot for me. That makes me really happy, because I really enjoy coming back and I want to win as many matches as I can to play in front of them.

Last night you impressed everyone with your amazing dress at the players’ party, who made this dress for you?

My friend, who is a Croatian designer, made it for me. Very often when I have tournaments’ events I like to wear her dresses.

In the second set, you managed to level up your game. What exactly did you improve and what will you improve further in order to win St. Petersburg Ladies Trophy?

I think we are still at the early stage of the tournament to talk about winning it. I just want to think about one match at a time and I try to improve only for the next match. I’m going to practice tomorrow on my backhand return – I was missing it a little bit today on the court. Maybe to add some spin to my forehand as well. Today I felt like the balls were flying a little bit, I had to be more patient, so that they wouldn’t go too far.

You are one of the few tennis players who participated in both the Neva Cup and St. Petersburg Ladies Trophy tournaments. Could you compare these two tournaments?

You cannot compare these two tournaments: one is an ITF event and the other one is the strongest WTA event in its category on the tour. The level is completely different. But the reason why I felt so good during the Neva Cup and why I’m coming back here every year is because of people: even in a small event they make sure that everything is taken care of and they show that they care about you a lot, they make you feel very welcome. I think that’s why I always feel so good here.