«DIAMONDS ARE THE GIRLS’ BEST FRIENDS»

And this wisdom was proved on February 11 when the reigning champion of St. Petersburg Ladies Trophy Kiki Bertens from the Netherlands, Maria Sakkari from Greece and Petra Kvitova from the Czech Republic visited the unique Treasure Gallery of the State Museum of Hermitage also known as the Diamond Room. As these rooms are situated separately from the main exposition you expect from the very beginning to see something extraordinary and really beautiful. And your expectation did come true. All the tennis players have a very busy schedule (every minute counts, especially during tournaments), so the guide decided to pay everyone’s attention to the most valuable showpieces of the collection. 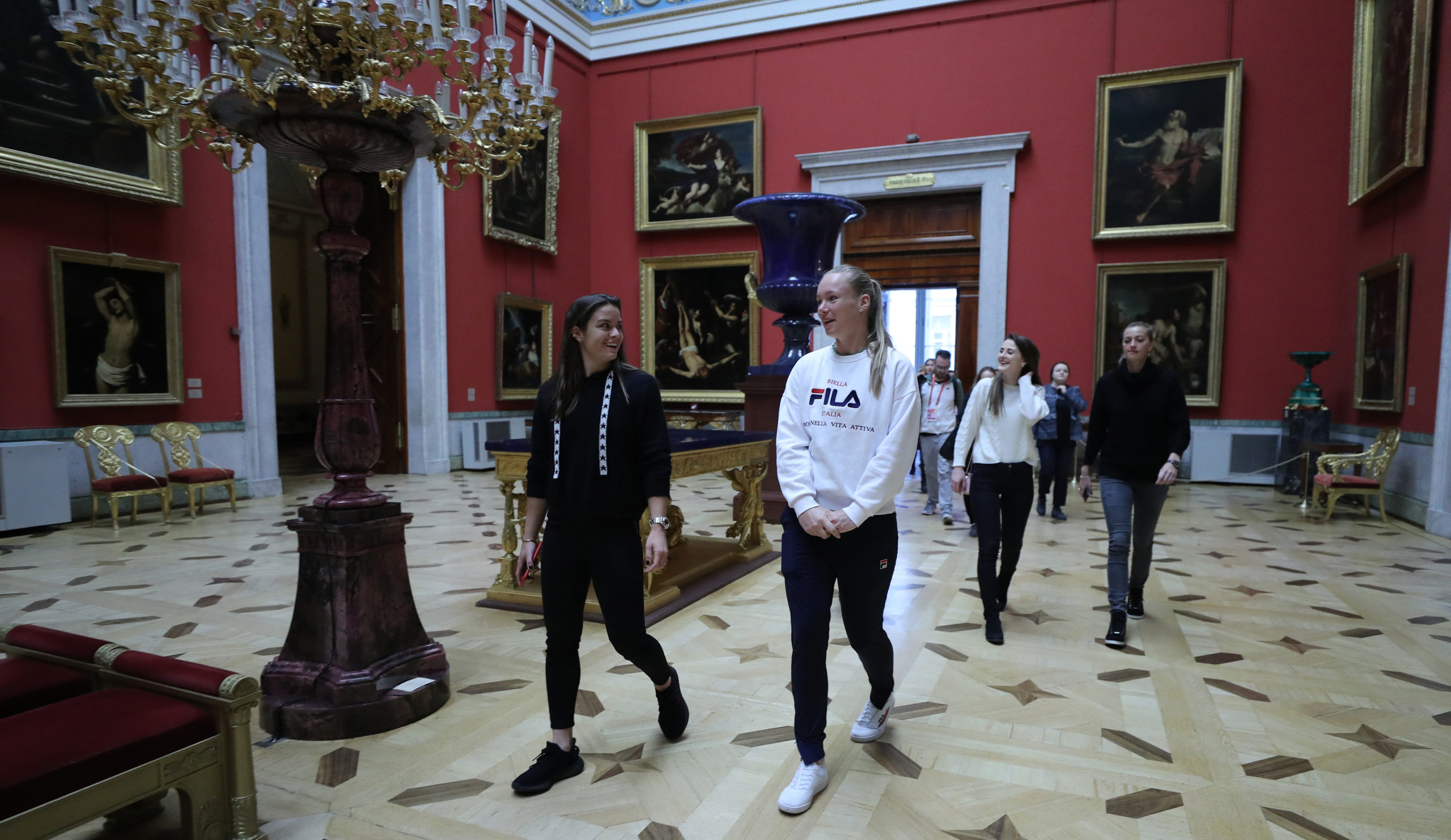 The excursion started with the collection of bulls created in the 4th century B.C. The next items on display where the tennis players made a stop were the dainty golden crowns of laurel destined for the champions. At that point one could notice a sparkle of a smile on the girls’ faces as all of them are real champions and, who knows, maybe before long one of them will hoist the main trophy of St. Petersburg tournament and not just the crown of laurels.
The whole chamber was devoted to the jewelry: bracelets, necklaces, rings made in micro engineering techniques. When you think that it was created in the epoch when there were no any high technologies, you realize how much hard the work of jeweler put into it. 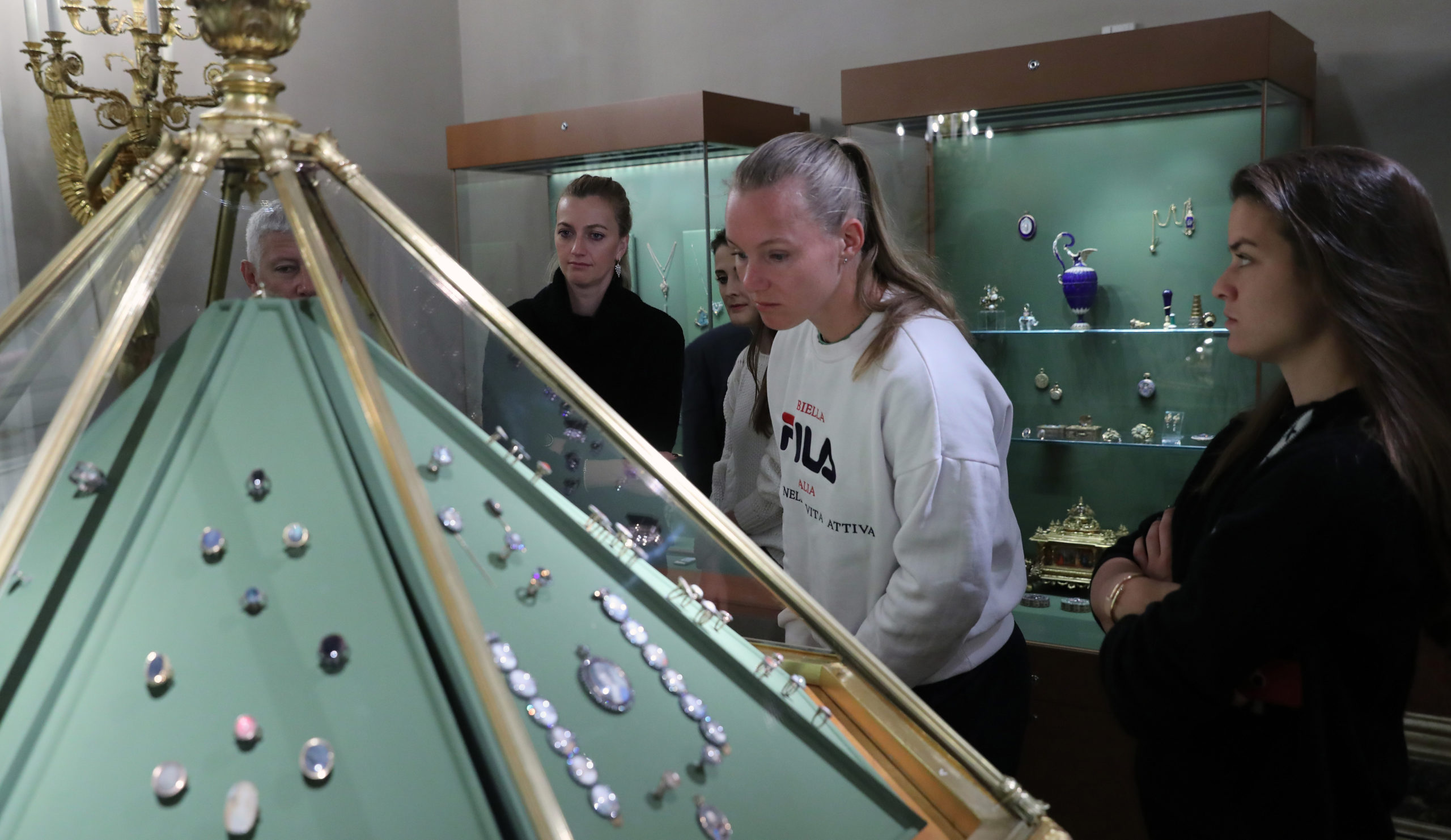 There were several glass goblets in the next room of the exposition – the guide explained that in medieval times it was important to have your own beautifully decorated glass so that no one could poison you. In those times poisoning was often used against enemies especially in the struggle for the throne.
A special stand featured several diplomatic presents to the tsar family. There was that golden hand mirror gifted by the Turkish sultan to Elizabeth I while the French ambassador gave the Russian empress the necessity box in the shape of the egg where she could found the travel set with all she needed: a file, small scissors, a flask, etc. Two kits of implements for horses look massive and gorgeous as they were decorated with diamonds. Those kits were used for special dates and included beautiful swords that were part of the ceremonial dress. 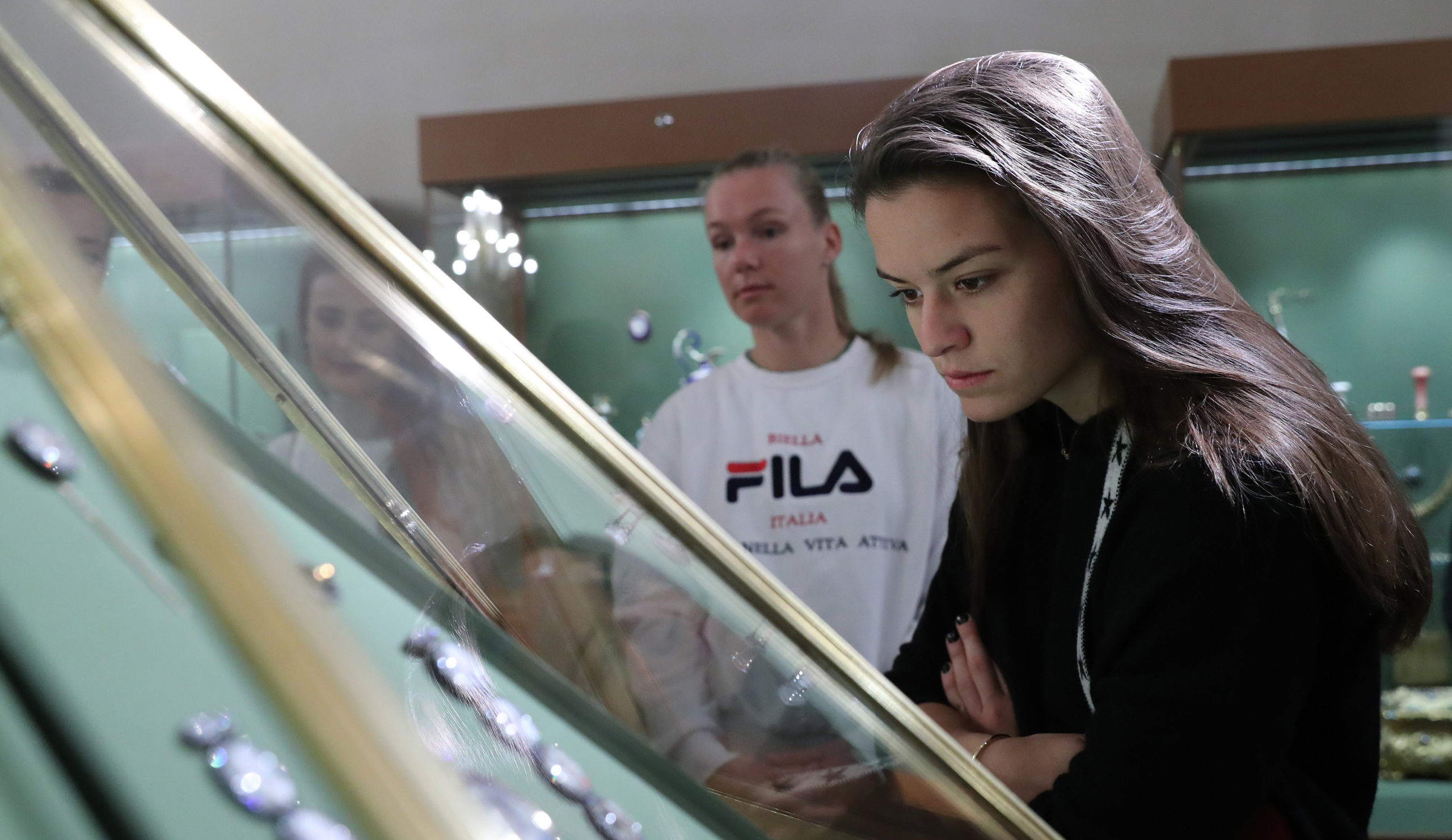 During the excursion the Greek tennis player Maria Sakkari asked the guide: «What item of the collection is the most expensive?». The guide answered evasively: «We don’t single out any masterpiece as the whole collection is truly priceless». All the tennis players liked the special tablets for writing the order of their dancing partners. It looked like a tiny hand fan where a lady could write down a name of her dancing candidate with a pencil and then erase it after the ball to use it again later. «As men could be sometimes rather annoying and pushy, these tablets reminded them when their turn comes» – the guide explained triggering a flirty laughter from the tennis players. 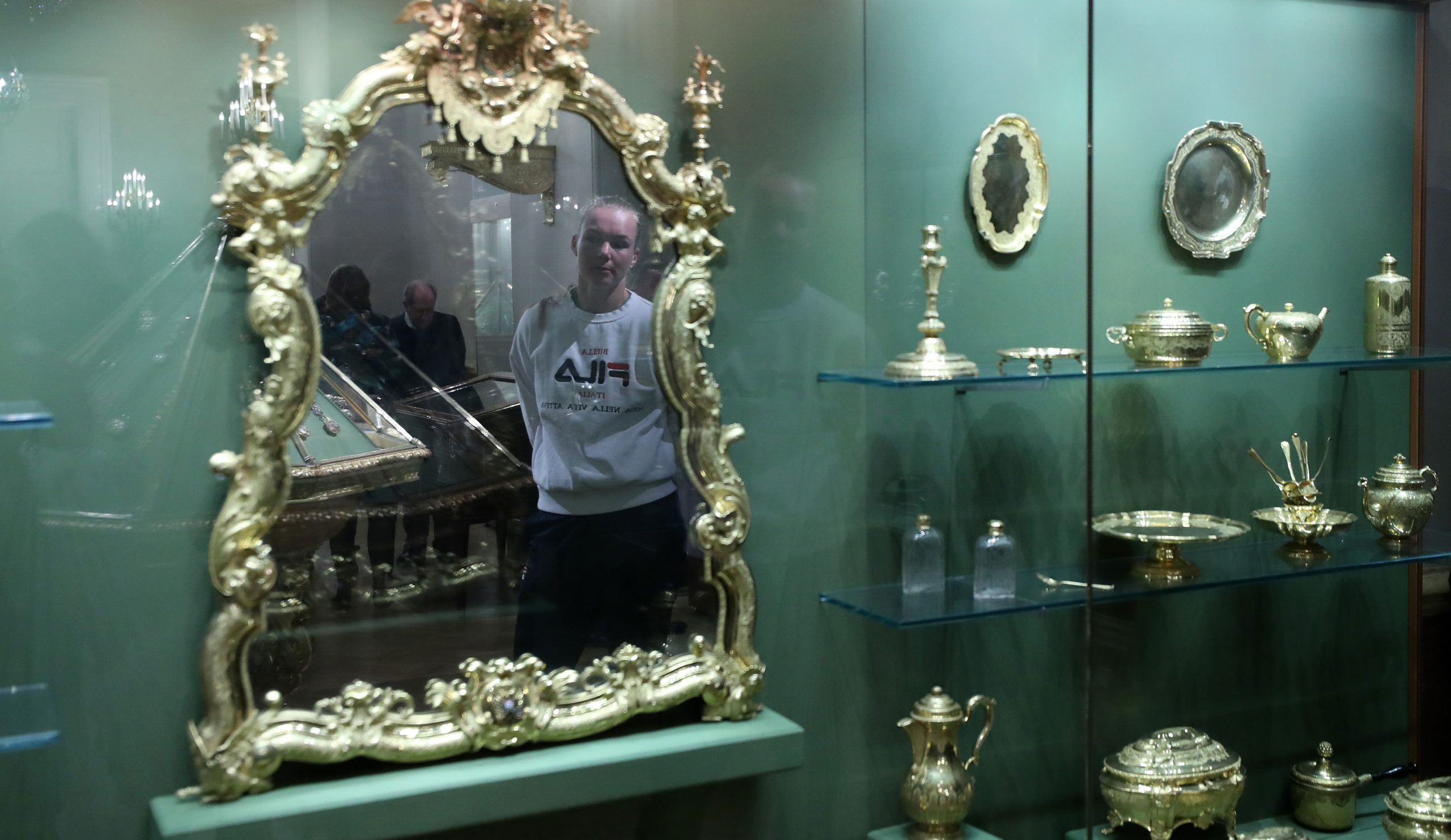 Brooches in the shape of the buckets of flowers made of stones, pearl boxes made by French masters who had imitated the Chinese style and design, an original writing set of Ekaterina II which was gifted to her by the Polish king (it looks like a green sofa whose arms hid an inkpot and other writing tools). There were several stands with boxes to preserve tobacco and cigar cases, decorated with stones, artworks of Faberge, pocket watches that, of course, weren’t hidden in the pockets as they were glittering even under the dim light… In short, sometimes tennis players were really agape not knowing where to look first, and coupled with interesting historical facts shared by the guide, these stories made items live in the imagination of the visitors. All the tennis ladies were fascinated by the collection and looked around with interest as they were going through the suite of rooms of the Hermitage. Then they decided to pose for a picture in the Raphael Loggias to better memorize their visit to the museum.