Like we said at the first press-conference here you defended the title indeed. Could you compare both wins here: the first one and the second one emotion-wise and in terms of game quality?
I think they both are very special to me to be honest. It’s also my 10th title – I think it’s a really special thing as well. To defend a title is always something special. You come here with such great memories and we you manage to win it again, when you have that beautiful trophy again. I’m just more than happy.
You played 2 really tough rubbers in the tie against Belarus in Fed Cup. It should have been really tough for you. How difficult was it for you to readjust and adapt switching from team competition to an individual tournament? And what the whole Fed Cup competition means to you?
I would say this week has been a really tough week. We lost Saturday night in the deciding doubles 7/6 in the third set 10/8 in the tie-break, so it was a really tough day. On Sunday I was flying here already, but I think I was crying still the whole night, because I felt so bad after that tough loss. And then I was coming here and just pulling in all energy I had left in me every day during my matches. My team was really pushing me this week, so I’m really thankful for that. You can still achieve anything if you just work hard and try to fight everyday and try to win every match, and then you can still hold the trophy at the end of the week. 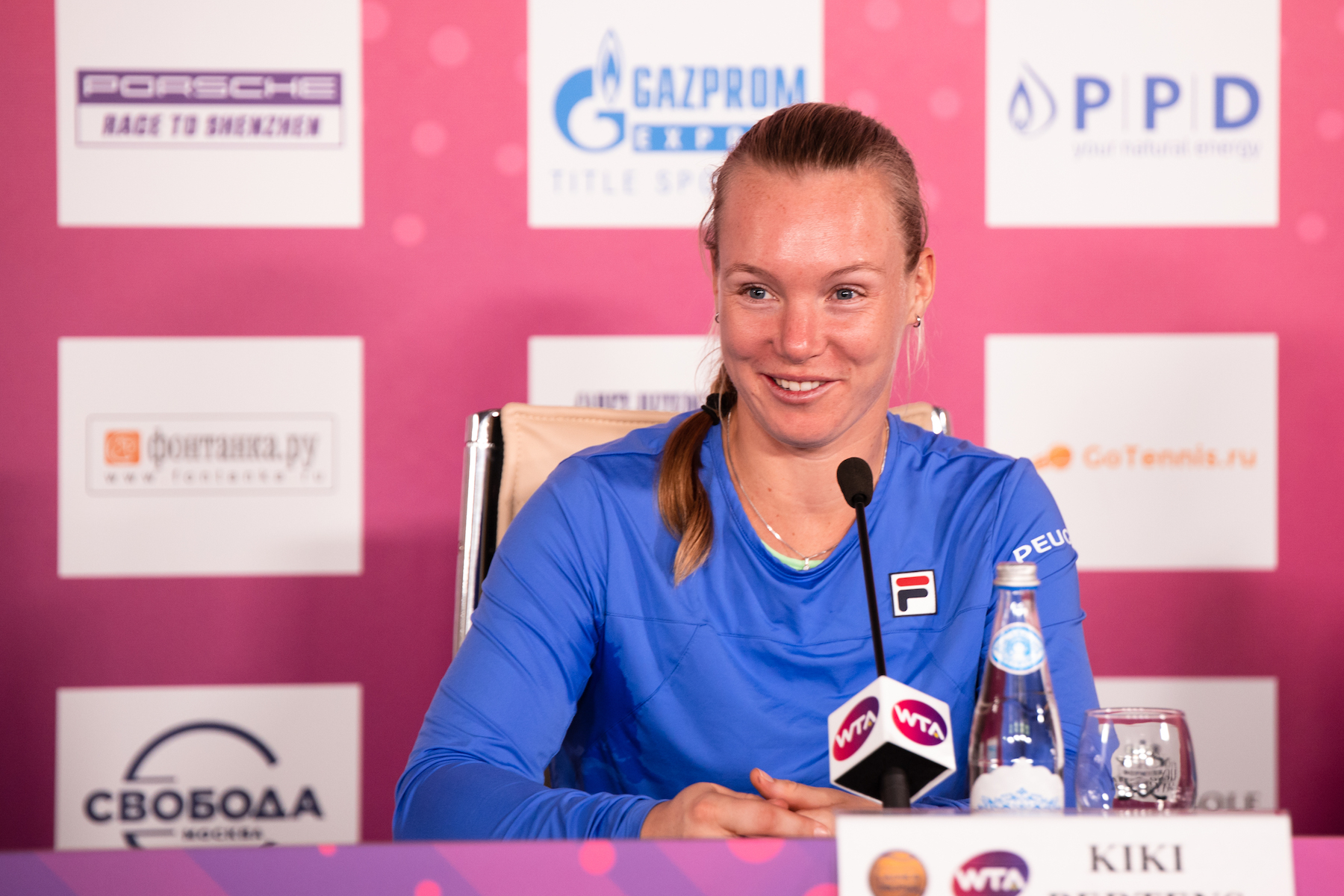 Did you expect the finals to be so easy for you?
I never expect any match to be easy to be honest. It still didn’t feel easy, maybe the score wise it was, but at the end I felt a little bit nervous, I was just happy to close it out. So it was only score wise easy.
You played the best match here, don’t you agree? You were hitting the lines so often and you played really well on key points. How do you make it? Do you think about winning a specific rally? And do you think about the score? Are you relaxed on not so important points and focused on key points?
I just try to approach every point the same way no matter what the score is, but still in your mind of course you know what it is. Sometimes on break points you just go a little bit more for your serve and that’s what I did today. I had a few aces, of course, maybe I had some luck, but also you just go for your shots and you have to do that, keep on believing in yourself and just try to finish out the match. I agree that it was my best match here.
I was watching really closely during the whole week and I’ve noticed that you and your team you were always calm on a court, but whenever I would burst into the restaurant of the players your team would be sitting on table playing cards. Did this card game help you to relax from matches? And what kind of game is it?
It’s a Dutch game. I don’t even know how to pronounce it in English. We bought it in the airport when we were flying here. We always like to play games in the team, and we are all very competitive, so sometimes you see the cards sometimes flying around the whole restaurant. It just makes it fun. For me it’s a kind of rest before the match. Still we all want to win every game we play. 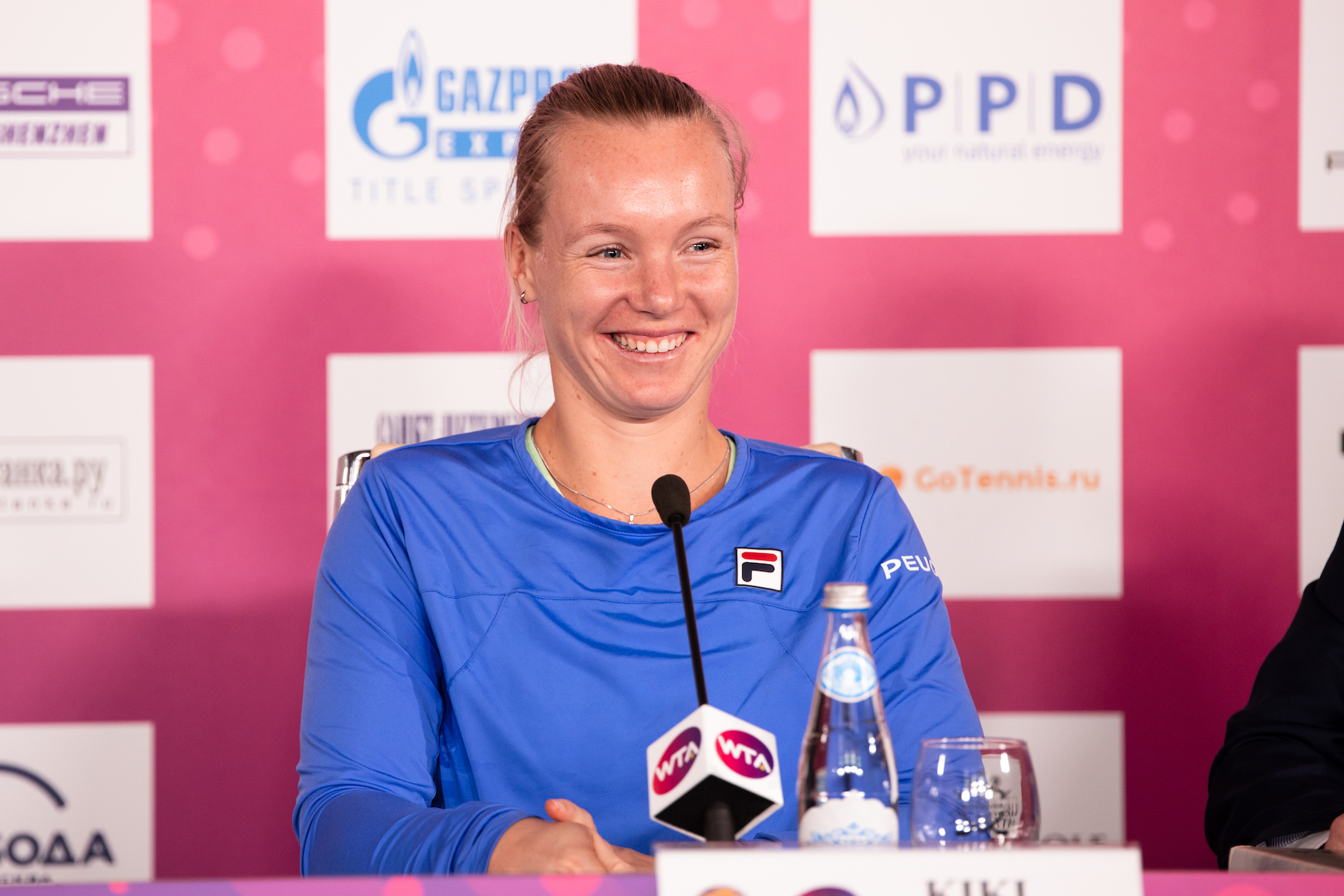 In one of the games you made three double faults and then you managed to win the game no matter what. How do you manage to focus on these points and how do you manage to overcome such a tough moments? Did you maybe have some mental trainings or preparations, when you facing three double faults and then you still win this game?
That one was really frustrating. I could not put that serve into the box. Sometimes you do it over and over again, but at some moments it’s just really tough to do and every time I was just like: “Ok, you are still in front and you are still leading by a break, so it doesn’t matter even if you get broken, you are still in this match, so just try to hit it in again”. I was lucky that she made some mistakes here and there, so I was still able to win that game.
We don’t know whom you voted last year, but can you evaluate this year organization? And can you share with us whom are you going to vote this year?
I think I have to vote for this one again (laughter). It is only the fourth tournament of the year but I won it, so why not.
In his on court speech Alexander Medvedev compared your game to the local club «Zenit» score and he said that we are going to ask you to come every year to have «Zenit» win the championships, are you going to come every year after this invitation?
I wouldn’t say that I will come every year, but next year definitely.