SVETLANA KUZNETSOVA: «IT’S NICE TO PLAY IN MY NATIVE CITY»

– Could you please share with us your impressions about matches against Elina Svitolina and Barbora Krejcikova in Dubai?

– First of all, I need to say that I started being this year not in the best shape. I did not have a good preparation for the season. Now I have to get in shape during the season. My game was already better in Dubai, but during none of the matches there I felt comfortable enough. I was fighting for every ball. The match against Qiang Wang from China turned out to be very tough, the match against Elina was also difficult.

– Elina Svitolina was attacked by fans in social media after the match against you in Dubai. Even the Ukrainian Tennis Federation made a statement asking fans to stop blaming the tennis player. Could you please comment a little bit on this situation?

– I do not think it is necessary to comment on inappropriate and incorrect actions of people who have bad manners and do not respect athletes.

– With what attitude did you come to St. Petersburg this year? How does it feel to come back after a hiatus due to the pandemic? How do you perceive restrictions now?

– The most difficult part of it is being constantly in the hotel room or on the court. You cannot go out, for example, to the shop. The first and second weeks are okay, but on the third and fourth it becomes psychologically really difficult. After the match, you do not have the opportunity to go out and communicate with ordinary people, you are always around the tennis players and their teams. This is a huge psychological pressure. I came to St. Petersburg in a good mood, I really want to play, have fun and I want to win as more matches as possible. 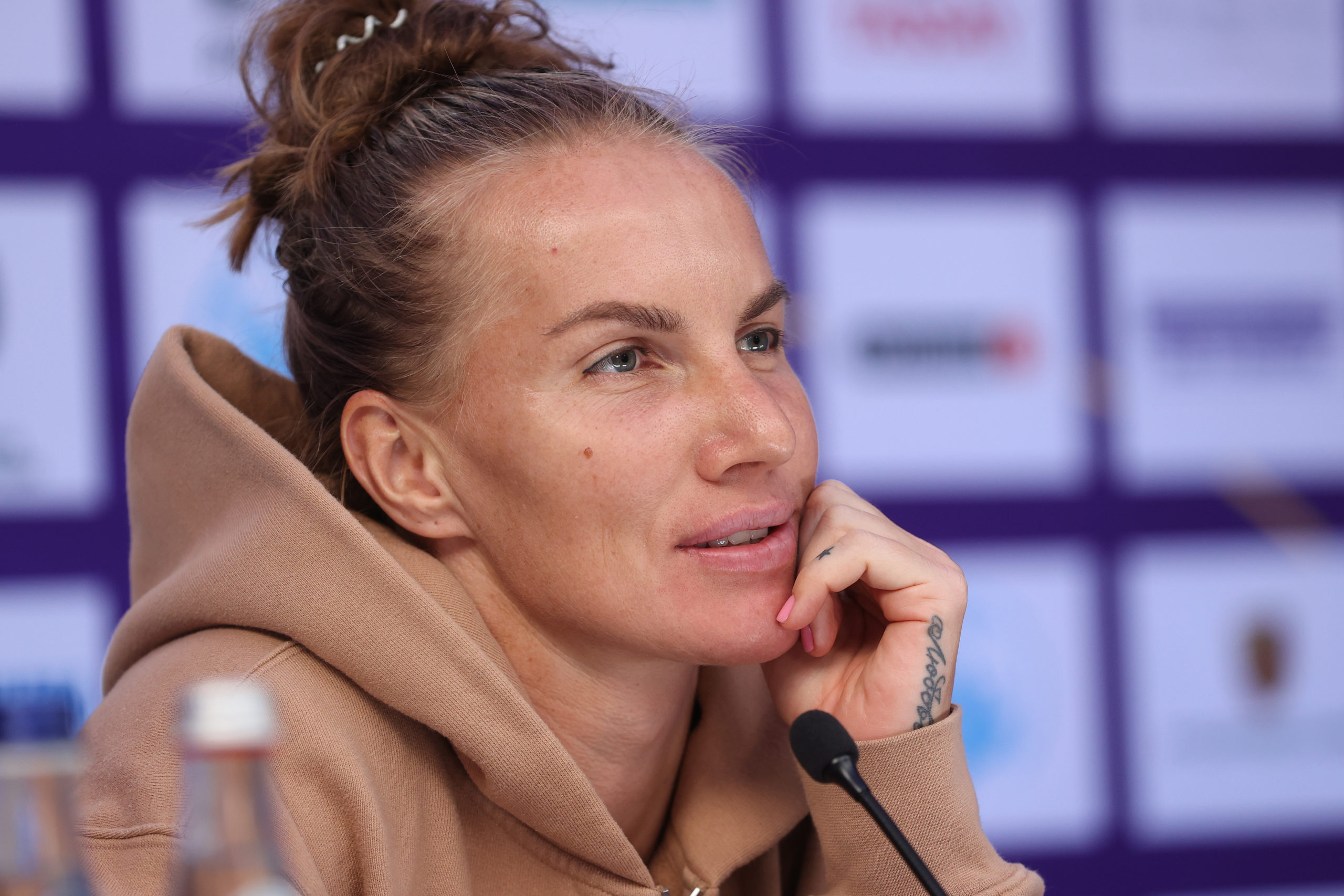 – What can you say about your opponent on your first match – it will be either Victoria Tomova from Bulgaria, or the Chinese Xinyu Wang.

– It will be a tough match. It’s always difficult to play at home, but I’m looking forward to this opportunity and this match. Playing at home is always very exciting.

– Vera Zvonareva was our guest, and she said that she doesn’t check the rankings, and she was simply motivated by the opportunity to play every match and win it, and she was no longer interested in the ranking. What motivates you? You have two victories at the Grand Slam tournaments, the title of the former world’s #2. In addition, you have a lot of wins in doubles. You were also a Fed Cup champion. What motivates you in tennis now?

– I don’t follow the rankings either, I’ve even stopped looking at the draws. I was asked today during the warm-up who was my opponent. I replied that I didn’t know. The girl laughed so hard; it was cute. I am constantly changing my perception of tennis and everything that happens. I probably won’t be original to say that I just want to enjoy my game and improve it. With age, despite experience, we perceive everything differently. I didn’t start this year very well; I couldn’t prepare properly and I am nervous at the matches. It would seem that I have nothing to worry about, I can play and I don’t need to prove anything to anyone, but, first of all, there is a responsibility to myself. I want to play well, that’s why I’m nervous. And I need to cope with it, but every time it gets better and better.

– You have singles 18 titles, and 16 in doubles. However, since 2018 you have stopped playing in doubles. Do you want to start playing doubles again?

– No, I don’t want to. Firstly, it is important for me to play with a pleasant partner. Secondly, in doubles everything happens very quickly, everything is always in the balance, and I have enough mental stress in singles. Plus, I always have very long matches; I rarely win in two sets, so I get worn out after every match. Therefore, I decided that I want to focus all my singles. 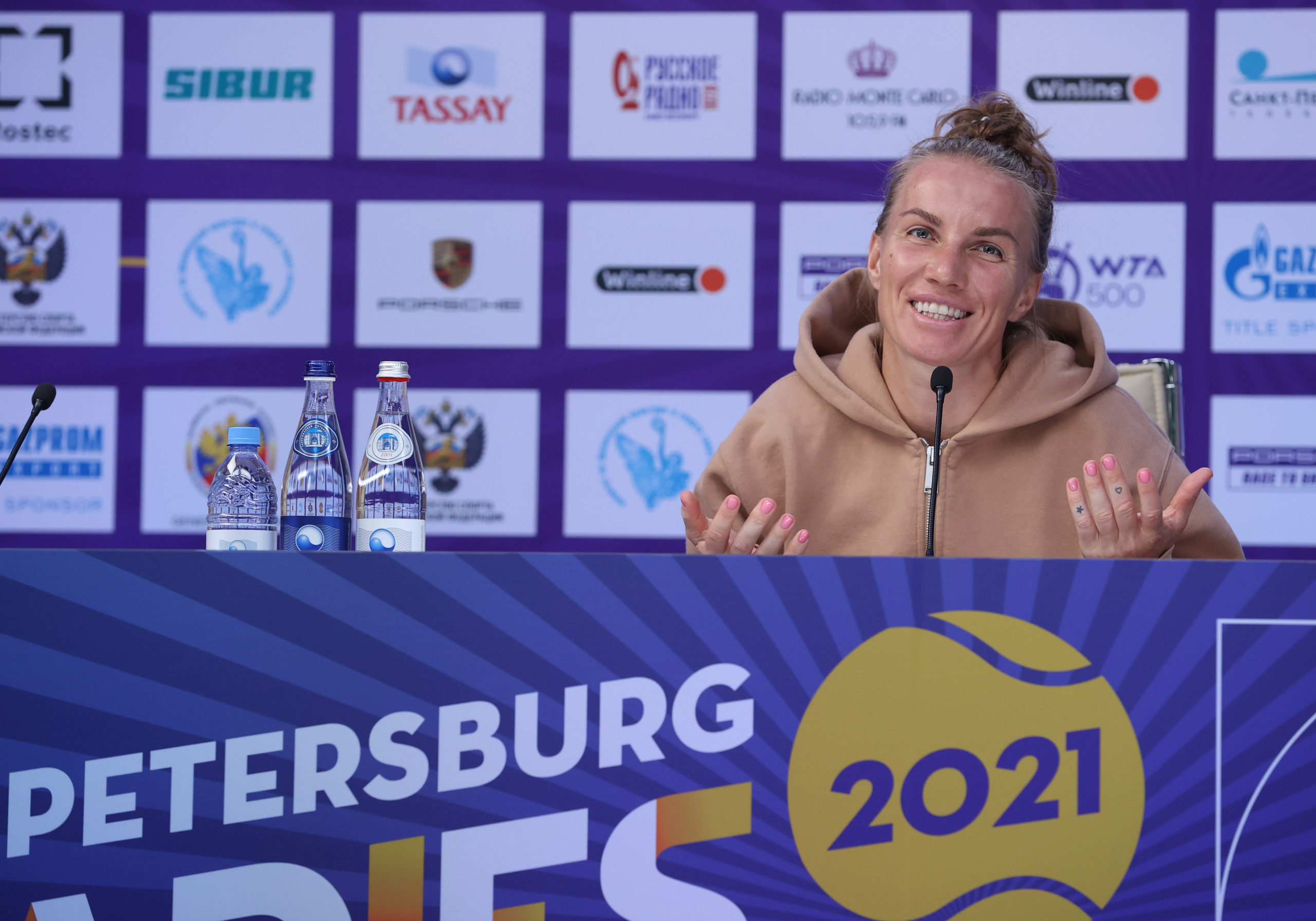 – You are originally from St. Petersburg and there will certainly be a lot of support at your matches, probably your relatives and friends will come as well. Does it put more pressure or responsibility on you, or will you be pleased when there is so much support for you? Once you said that it was more comfortable for you to play in Moscow, because there you didn’t feel all that pressure that much.

– There used to be pressure. When there was no tournament in St. Petersburg, and I played in Moscow, I could not play there either. Even when I won the Grand Slam tournament, I couldn’t handle my nerves. I was numb, but over time I managed to cope with it. I hope I will manage with my feelings in St Petersburg as well. I really want to. My niece was going to watch my match from the stands for the first time, and I am very happy about that. Unfortunately, my parents are in Spain now. But I will say this: it’s nice to play in my native city.

– You mentioned that you didn’t manage to properly prepare for the season, because you had some troubles with your health. Are you better now? And did it trouble you to prepare while being quarantined in Australia?

– I was sick and then injured my foot, because of that I had less opportunities and I knew I had to travel to Australia. I haven’t played for a long time, since Roland Garros. And I knew that if I didn’t travel, I would have to wait another month and a half for the next tournament. I decided that if I go to Australia, I will be able to practice for 2 weeks before the tournament. But I got unlucky, there was a passenger with positive corona virus test on my flight and we got quarantined for 2 weeks. I tried to get what I could out of this situation and continued to practice in my room. Almost every day I did some exercises and tried to return in shape.

– Could you, please, explain how you managed to train in a 20 square meters hotel suite?

– I got lucky and my suite was a little bigger than that. I practiced my forehand in one room, my backhand in another and did split-step between doors, used indoor bike. I have a portable training simulator which allowed me to perform explosive strength exercises and practically saved me, I ran intervals in the room – tried to be as creative as possible. Finding the right exercises is not a problem; the key is in the attitude. I was approached by one player at ATP tournament in Melbourne; he asked if I enjoyed the quarantine and how I passed the time. I replied that I practiced twice a day. And he said: Well, I tried to use the indoor bicycle and it didn’t click with me. So, it is all in the spirit.

– You are also developing a project for psychological consulting. It was released in such uneasy times; maybe you can share some insights and interesting stories from this field of your work?

– Yes, we are constantly developing a project called “Beseda. Life” and trying to improve it. Currently we are searching for the best way to maintain our Instagram account. Unfortunately, we had some trouble with the website, but it will be up and running this or next month. Our main idea is to invite psychologists from different companies and from private practice to consult people online on our platform. All sessions can be recorded and there is an option to keep your log on the website. This is a good investment in our future and my way to help people.