– You said on the court that you needed to adjust to Jaqueline Cristian’s game. You hit heavy strokes close to the baseline – sometimes it became such a powerful “half-hill” that seemed to confuse your opponent. At least she didn’t always manage to deal with them. Is it correct to say that this is one of the elements of your game that helped you win today?

– This is basically one of the elements of my game, so, of course, yes. I know that with such strokes I have an advantage over other tennis players, because very few people play the same way.

– You were also happy with your serve today. It seemed like you have tried all the serving options today and, in general, you succeeded: slice serves into the deuce square, kick serves and flat serves – you played all of them. Is it so?

– Yes, the emphasis was on my toss. When I toss in the right way, I serve better. It’s weird because it’s kind of easy – it’s just a toss, especially when you have been playing tennis for 20 years. You just need to focus and the serve will work out. But it is not always as easy as it seems.

– It seemed that at some point you doubted Hawk-Eye’s decision, and it looked like you thought that your opponent’s ball hit the court. You even stared at the line so intently. Was that impression correct?

– He surprises me a lot, this Hawk Eye. And today the chair umpire  finally told me the right thing: when you ask for a challenge, you check the machine that just told you that it saw the ball out. The machine will not give you any other answer, so it’s strange to take this challenge. I was just wondering how wrong the Hawk Eye is. That ball went wide, true, but literally a micron away from the line. 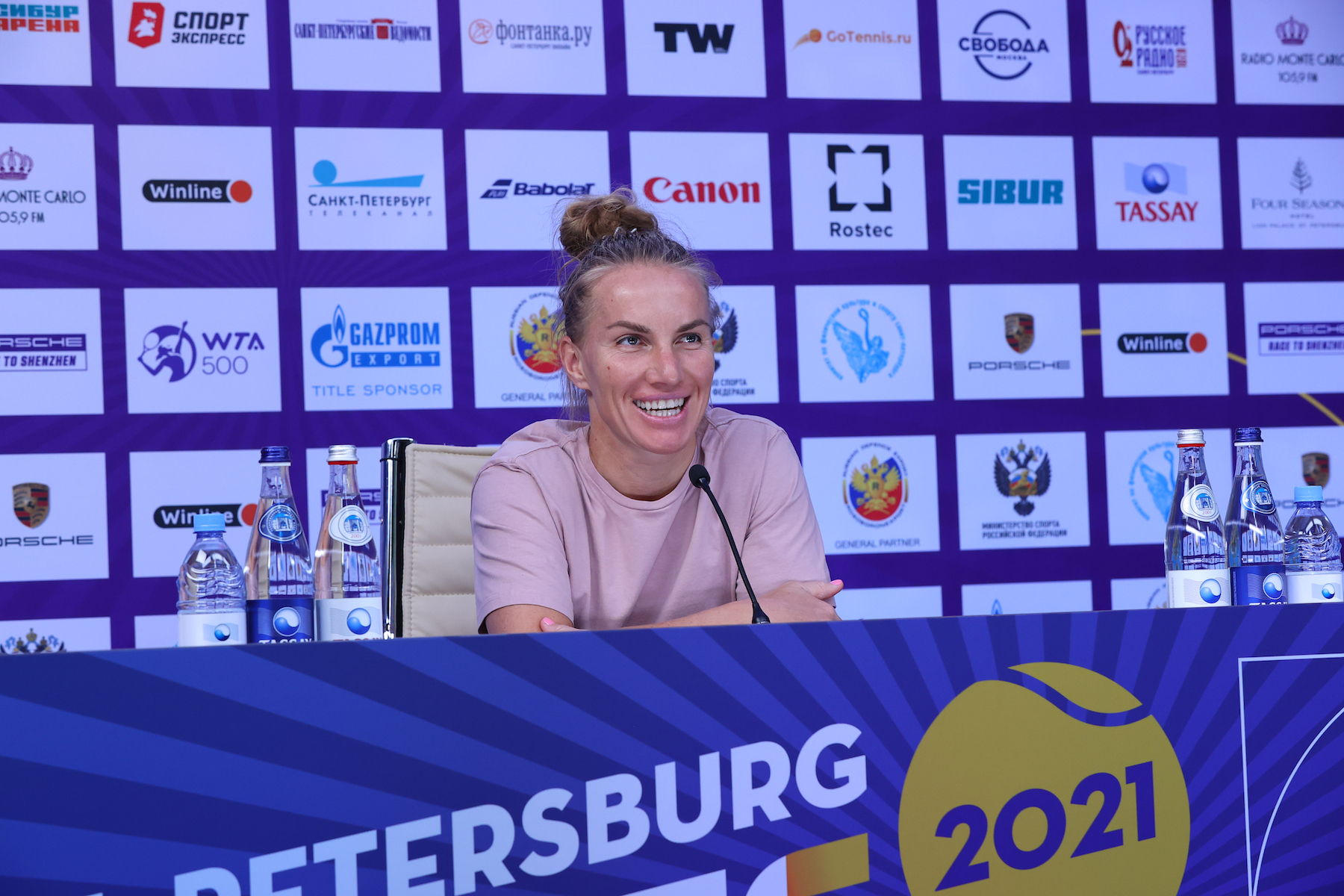 – Did your opponent surprise you at some point? She is a little-known player for Russian journalists. What are your impressions?

– It seems to me that she adapted to the court, to the surface during the tournament. This made it difficult for me to play against her. I had only one match here so I lack confidence in my game during the season, but I am gaining it with every match. It sometimes looks like she can relax you a little. She doesn’t seem to play that well, but she feels the court extremely well and plays in an unusual way. It took a while to get used to her tennis.

– You lost the first set and after that you managed to regroup. How did you manage to do it? And how important is it for you to perform well in St. Petersburg?

– I am very pleased to play here, but I try to think more about the game, because this is the same stadium, the same court, the same lines. I lacked a bit of opportunities on the tie-break, but I felt that my game was there, my advantage was still with me, and I just needed to adjust some moments. This confidence allowed me to regroup and establish the game. 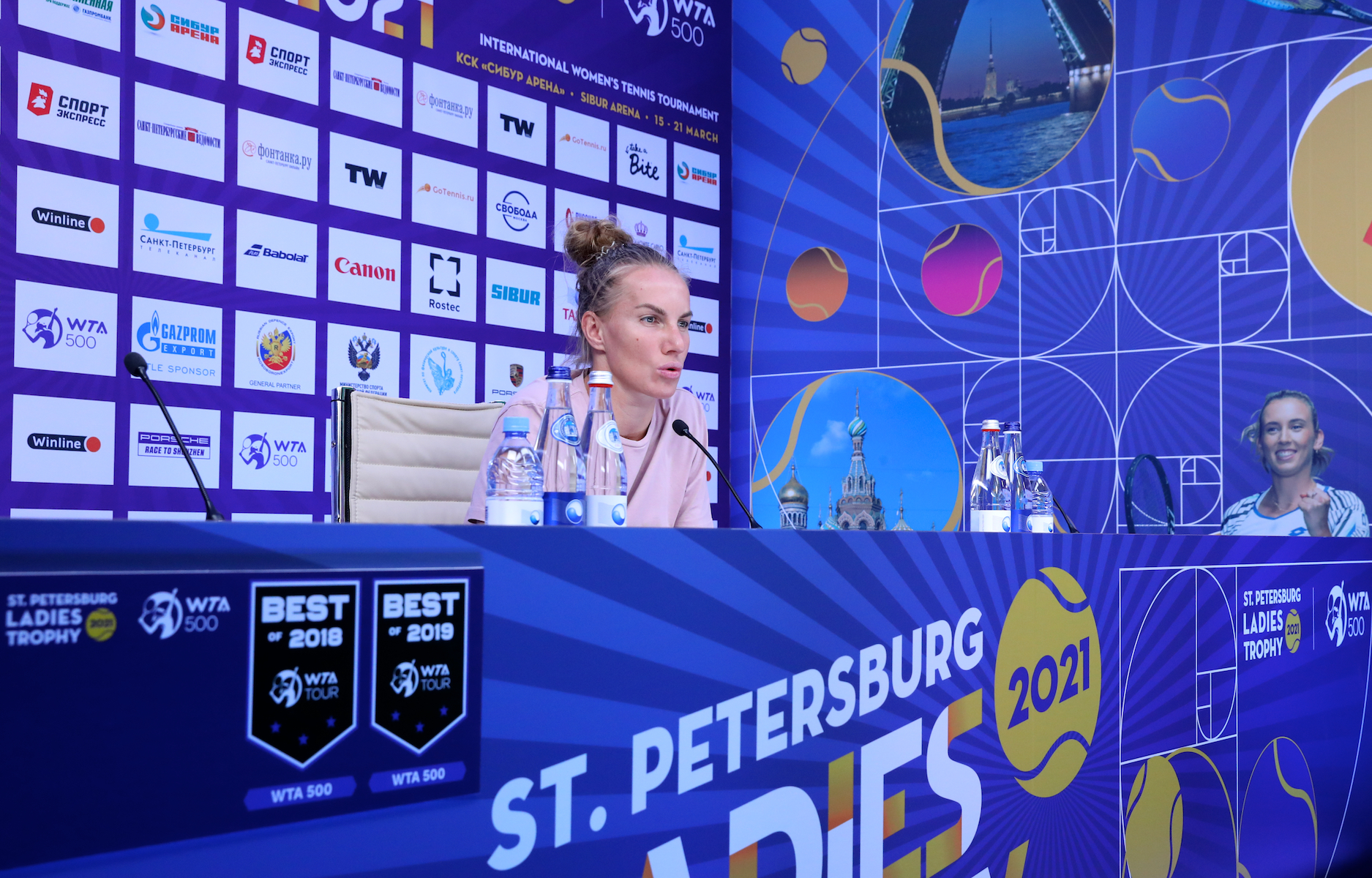 – You regrouped pretty well after the first lost set, how did you manage to do that? And how important it is for you to perform well in St. Petersburg?

– It is a pleasure for me to play here, but I am trying to be more focused on the game because it is the same stadium, same court, and same lines. I didn’t have enough opportunities in the tie-break but I felt that my game is still there, my advantage is with me I just need to work on some nuances. This certainty helped me to regroup and get the game going.

– Considering your huge experience and the success that you and Vera Zvonareva achieved, what can young players such as Anastasia Gasanova learn from you?

– I think that young players already have everything they need and already know everything about playing tennis. The only thing that they can learn from us is work ethics. Vera is an amazing professional, she is fully dedicated to tennis, I am not so much but still I am enjoying the game and we are both still here, we haven’t quit.

– At one of the press-conferences you said that it is very important for you to get up from the right side of the bed in the morning. So, which side was it today?

– (laughter) Lately during practice I feel that I am playing perfectly, but I actually understand which side it was only when I am out on the court. Today I won, so I guess it was the right side. I just need to determine which side is right in the end.