– Today you paid your respects to the opponent in the on-court interview, you said she fought well fending off the match-points. Could you have converted the first match-point? What went wrong with the first and second match-points?

– It was a tough match. I wouldn’t say anything went wrong. She played really well but I have no complaints about my game, either. Yes, maybe I could serve a little better. Maybe the percentage of the first serve dropped at some point and I allowed her to return more actively, but in general I think the credit goes to her. Nevertheless, I fought for every point and managed to finish the match with that game. This is probably the most important thing.

– Your opponent has been at the press-conference just before you came and she said that physically she only lasted for the first four games. After all she had really played here long  matches and it is doubtful that she was trying to look for excuses to justify her loss. Did you feel that she was tired? Or you didn’t pay too much attention to your opponent and were more focused on yourself?

– First of all, of course, I was focused on my game, but I knew I had to make her run along the court as much as possible and lengthen the rallies. On this surface the ball doesn’t bounce very high, it stays low – so it is not easy to go for winners. If you’re trying to go for it too much, it’s likely you’ll make an unforced error. I was just trying to make her move around the court as much as I could and then take any opportunity on the shorter balls. I am glad this worked because I saw that she started to rush. Apparently it was physically hard for her and I managed to take advantage of that. 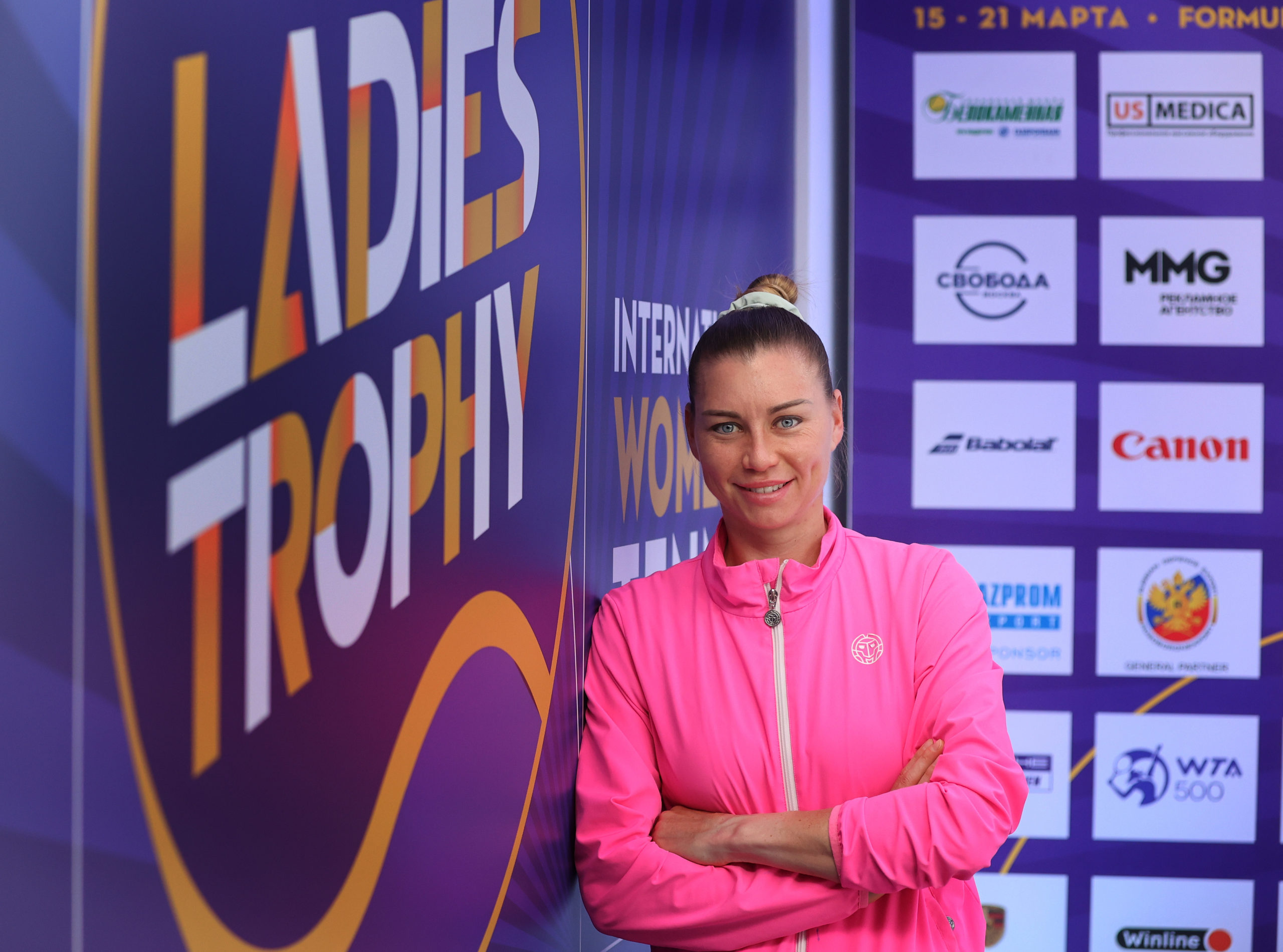 – How did you manage to come to this tournament in such a great physical shape? Despite your previous long match, you looked fresh and cheerful on the court. And you also managed to play doubles… Speaking of which, please, tell us about  your last doubles match.

– Physically I am really well prepared and ready to play this tournament both in singles and doubles. Our last doubles match was really tense. It seemed that we did everything to turn that meet around and win it and then just could not close out. It was a very disappointing loss. I can’t recall another one where I would be so unnerved by the loss in doubles. But this is tennis for you, it happens. It has been a long time since we last played doubles with Elena and for her this is only a second tournament after her return. I think, we will draw conclusions from this match and I hope when we find ourselves in this situation next time we will be able to win.

– You move well on the court, you easily play long rallies. How do you estimate your physical shape and can you compare it with the ones you had before your leave? Is it close to what you had before or do you feel that you have to improve?

– There is always something to improve and something to aspire to. But I feel well and I don’t see any problem in playing long rallies. I am a sturdy sportsman in general. However, I understand that I have to work harder now than I had worked in my youth because I am loosing shape faster now and I can’t stop, I must keep it up.

– No, I don’t think about the ranking at all. This is meaningless to me. For me the main thing is focusing on the game and trying to improve it to defeat stronger opponents. I think now that the ranking is frozen it is hard to get much higher in it, despite many successful performances. Especially for me because during the times when points still counted towards the ranking, I didn’t play because of the injury. So now, it doesn’t matter how many points I earn, I will not get too high in the ranking but I think this is not important. The most important thing is to play against strong opponents and defeat them. 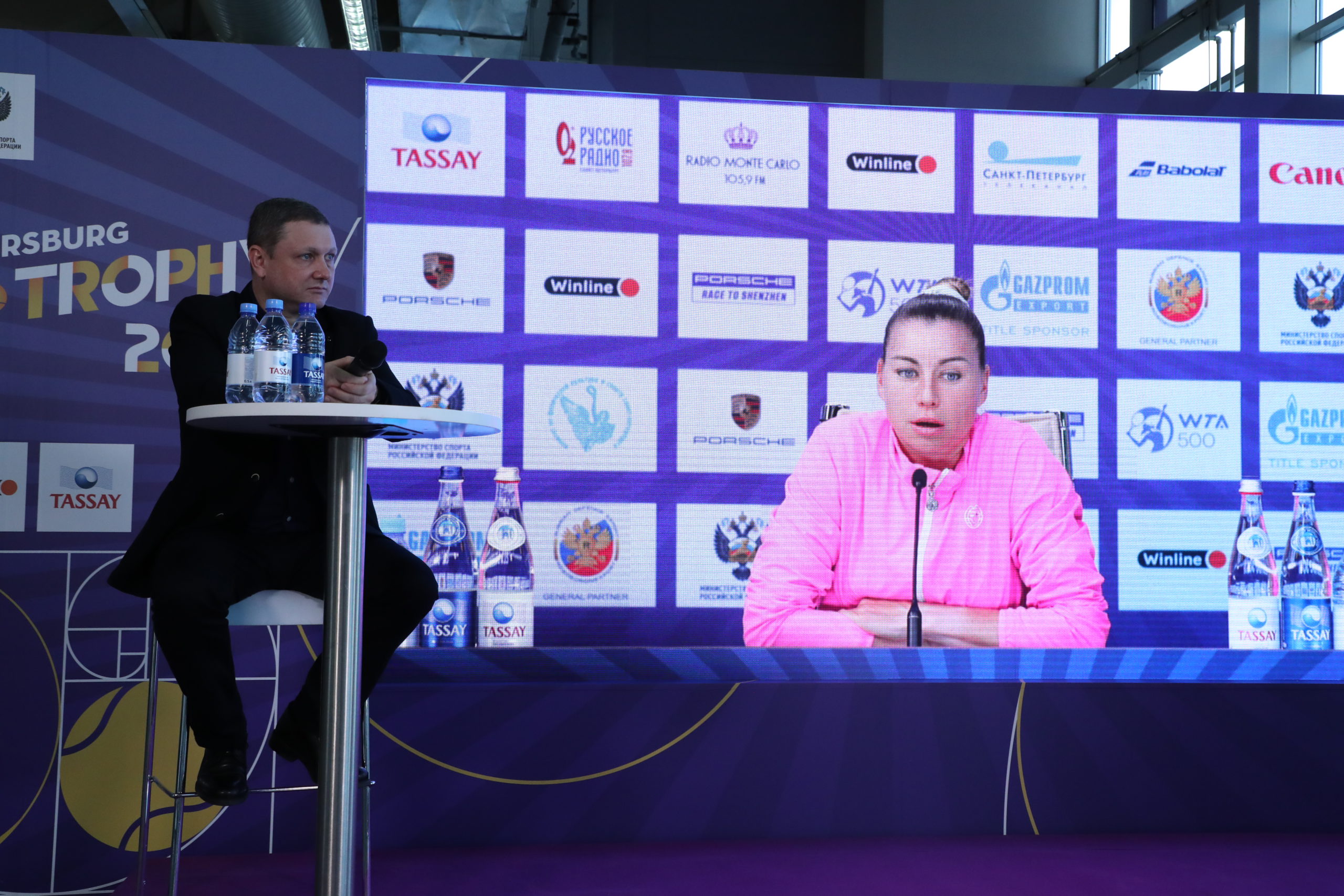 – Your next match is going to be against Margarita Gasparyan. You played her here last year pulling off a comfortable win. Will the last match help you to prepare for tomorrow’s semifinal or everything that’s past should stay in the past?

– In general, yes – past should stay in the past. Some conclusions were drawn and you should start every match from scratch: you never know how it is going to play out. Back then we played in R1 in qualies here last year and now we’re here facing each other in the semifinal. She’s a great player and it will definitely be a tough match. She’s hitting the ball very hard and her back-hand is great, a one-handed backhand which is very unusual for the women’s game but I will try and enjoy the challenge.

– How comfortable are the St/ Petersburg’s courts for you, do they suit you in terms of strikes and speed?

– In general it is very comfortable for me to play here, but I know there are also players that feel comfortable here. Margarita is among them, so we will see how it plays out tomorrow.

– You are not only a tennis player but also a founder of the «Rett syndrome association». Can you, please, share some details of your public awareness activity? Maybe there are projects that you can share with us? And how do you combine these activities and your tennis career?

– I have good helpers who are working on it. Our organization offers support to children with Rett syndrome – this is a rare genetic disease and we have many projects now including the ones for the parents and international ones. Now we are making videos for the parents with different specialists who share their experience and explain how the children could be helped. This is very important because it is a rare disease and not many people are aware of the coping strategies. We would like to continue this work for as long as we can.