– Aslan, you’e had a great run in Dubai and hoisted your maiden singles ATP title, and we all congratulate you on that. Who were the first people whom you shared your emotions with?
– With my parents, my team and a coach who were supporting me. All my relatives contacted me and said they are happy.

– What emotions do you feel after this win?
– I am very happy. I was aiming for this victory for a long time, I am 27 and it is my maiden title. I can’t say it is late but I am not that young. And I can say that all my work wasn’t in vain. This title will bring me more confidence in myself.

– In Dubai you played 6 matches, 4 of which were three-setters and only two of them were easy ones – the opening match and the final. Which of these two matches you can single out and why?
– I think, the first one was tough as I arrived from Doha. We came together with my coach; at that tournament the court was rather slow. And it was strange for me. That is why my first match was rather tight and luckily I won it. Then I had a very tough battle with Andrey Rublev. We is playing in a different manner and I got tight but then I managed to compose myself and sealed a win. 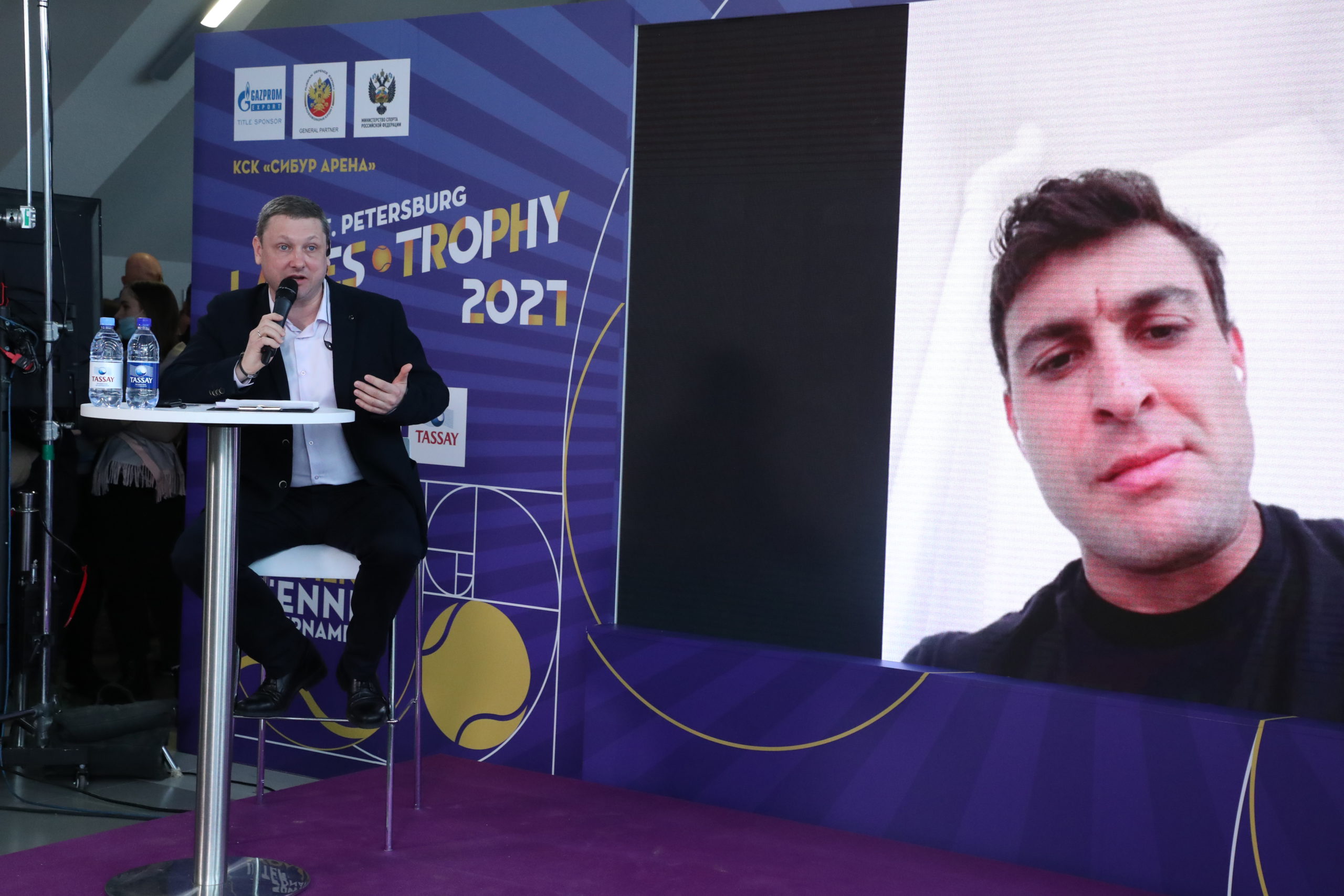 – How does it feel to play against your compatriots like Andrey Rublev? Or you played it like all the rest ones without thinking about whether you are friends or not in normal life?
– I’d say it is complicated and I tried to tune in for the match. Last week we played doubles in Doha and won the title. And this time I tried to compose myself with the thoughts that it is my job. Since I have my team which gives all its energy and time to me, I can’t let myself just step in court and say that he is my friend that is why…or something like that.

– What is the most memorable moment throughout your career?
– I think it is the Dubai finals. I played well there and it helped me to clinched my debut ATP title and very significant. Also, I can say Australian Open performance gave me a huge boost and I got my confidence at the beginning of the year. It is difficult to single out just one match.

– Last year was also good for you as played two finals at Challengers and won two titles. How did you spend this pandemic pause everyone had this year?
– Before the pandemic I was playing the tournament in Kazakhstan and I was in the quarterfinals there – then we were told to leave the country and I went home. I was practicing during 3 months to keep myself in shape. And when the tournaments’ start was announced, it was August 18 I went to America to play an exhibition match there, so I had game practice and spent my off-season, too. Everything worked well for me – when I arrived on tournaments, I have had game practice already. Some players weren’t playing and were not practicing for example. And I was luckier that my coach decided to make me play the exhibition tournament that is why I started to compete with a confidence and won two tournament and played in one more final.

– This year you lost only to two players Novak Djokovic and Dominic Thiem. They are best the top players. When has the feeling of that you can compete with the strongest tennis players in the world come?
– I was ready to do it last year already but the Australian Open gave me a psychological and emotional boost. And I advanced to R1, then R2 and R3. It gave me a lot of confidence. You understood you had to come on court and show your best tennis. That is why I think that everything started from Australia.

– What were you thinking playing the Australian Open main draw? Didn’t it seem like a dream?
– I was very happy and I tried to focus on each match and was happy with every win. I tried to come on court in a fresh form and to recover well before every match so that I can show my best tennis.

– Last year you were playing here in St. Petersburg. You beat Tennys Sandgren and fell to Karen Khachanov in three sets. What did you need to do to go further?
– Thanks a lot to St. Petersburg Open tournament for handing me a wild card last year. I was up in the score during the match v. Karen Khachanov but then I had cramps or even it was because I was nervous. I haven’t played enough matches on such a level back then. I was nervous and got tight – I think it was the main reason for my loss. 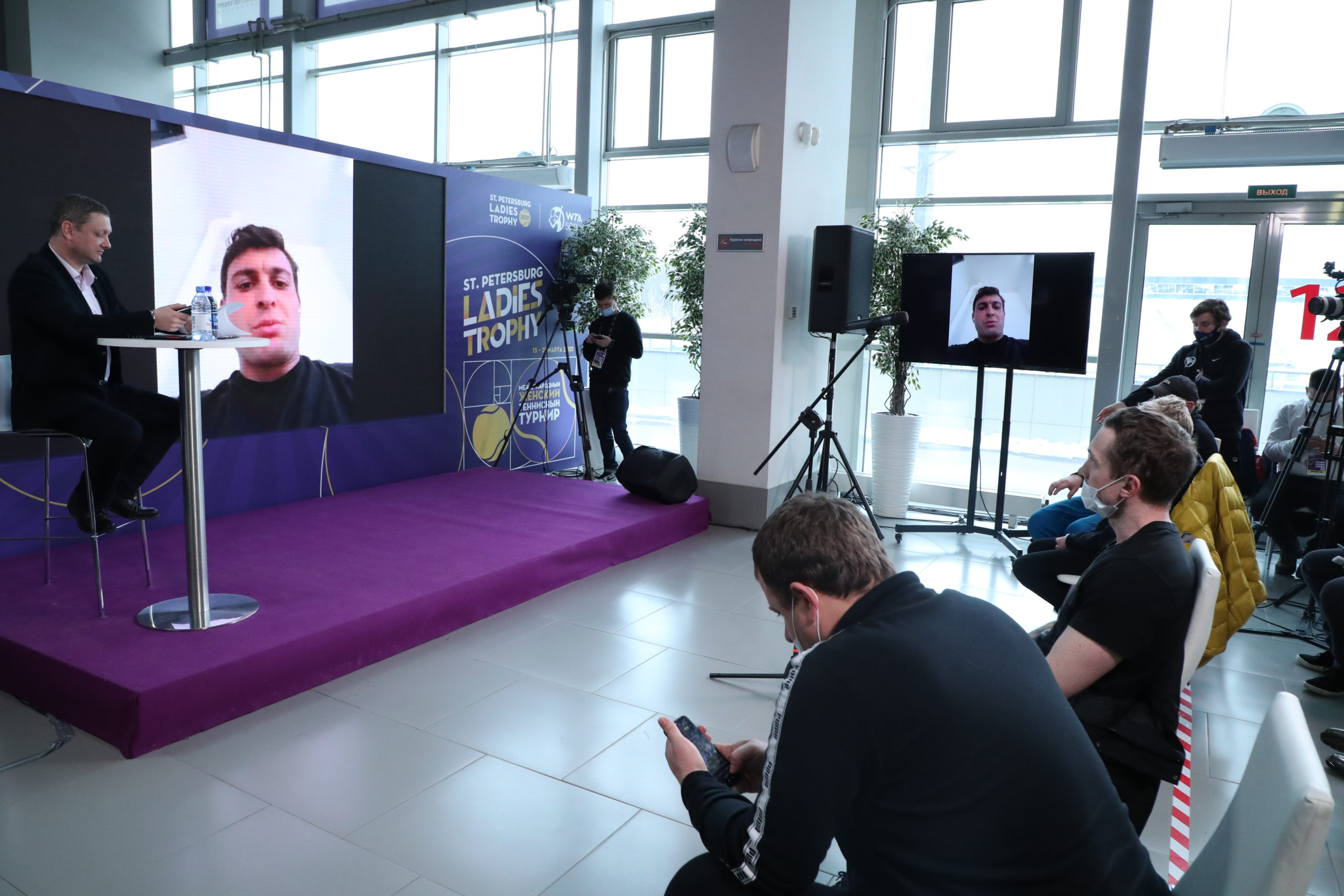 – Next week you will reach the Top30. What goals are you setting this season?
– We are planning to reach the Top 20 and it is our goal. Now I am going to Miami. I will start my preparation for it in a couple of days and will start the tournament on March 24.

– Did you have a chance to leave the bubble in Dubai?
– No, I am still in the hotel and flying to Miami soon.

– A year ago you lost in the quallies of a tournament in India. What breathrough happened this year that allowed you to outplay Rublev and other top players?
– I’d say these changes didn’t happen just this year. This is the fruit of the hard work we’ve been doing for the last three years. I am working every day. No one knew when it would give its results. Yeah, I lost in quallies last year in challengers but I continued working. And my breakthrough happened now but you never know when it comes.

– You have such a cool game style that it seems that tennis comes to easy to you. How can you describe your game? What are the features of your tennis? And what are the most important technical features?
– I don’t know how it can look easy from aside but it doesn’t seem to me like this. I am trying to play aggressively and close to the baseline, that is how my game looks more aggressive. It looks spectacular but why it looks easy I have no idea. I am trying to play my game to come to the net and to finish the rallies with a volley.

– Do you have time for your private life?
– I am trying but it is tricky.

– Do you like to practice in Minsk? How do you like the city?
– Minsk is an amazing city. I’ve been living there for three years already. I am practicing in J-PRO center, where we are provided with courts. I have all the right conditions. It is very good and comfortable for me and the city is small and cozy. I feel well there.

– The brightest moment of your life is…
– Victory in Dubai.

– What clothes do you prefer?
– The classic ones, when I have such a chance.

– Your favorite console game is…
– ‘Call of Duty’.

– What magical ability would you like to have?
– To fly.

– Classical or contemporary music?
– I like modern music. Sometimes I listen to classics and fall asleep to it. In general, I listen to MiyaGi.

– Mountains or seaside?
– I would say the seaside. I lived in Israel and I am more used to the sea.

– What is your negative personality trait?
– I open myself to people very slowly.

– What do you do to cheer yourself up if you are upset about something?
– I’m watching a movie or TV series.