– To cheer you up a bit, we will ask this question: yesterday your fan shouted “Margo”, but he obviously read our report with your request not to call you like that. And today he shouted only “Rita, Rita!” Have you noticed this?

– Yes, I have noticed that no one shouted “Margot” today, only “Rita!” Thank you all very much!

– What happened with you? Why did you decide to withdraw from the final? When did you feel the pain for the first time? Maybe yesterday you felt the pain or when you step on the court today?

– I already had some back problems in Australia and in France. I couldn’t do anything at all for a couple of days In Australia. Probably I played a lot of matches and was tired by that moment. I was very worried, especially today and, apparently, made things only worse, so, unfortunately, I could not continue the match.

– Was there such a dilemma: to go on the court and to play or not to go there at all? Or were you determined to go there and play?

– I really wanted to play, I wanted to finish the final match. Withdrawing in a finals is not very good. There are spectators who want to watch tennis so I am sincerely sorry that it happened. 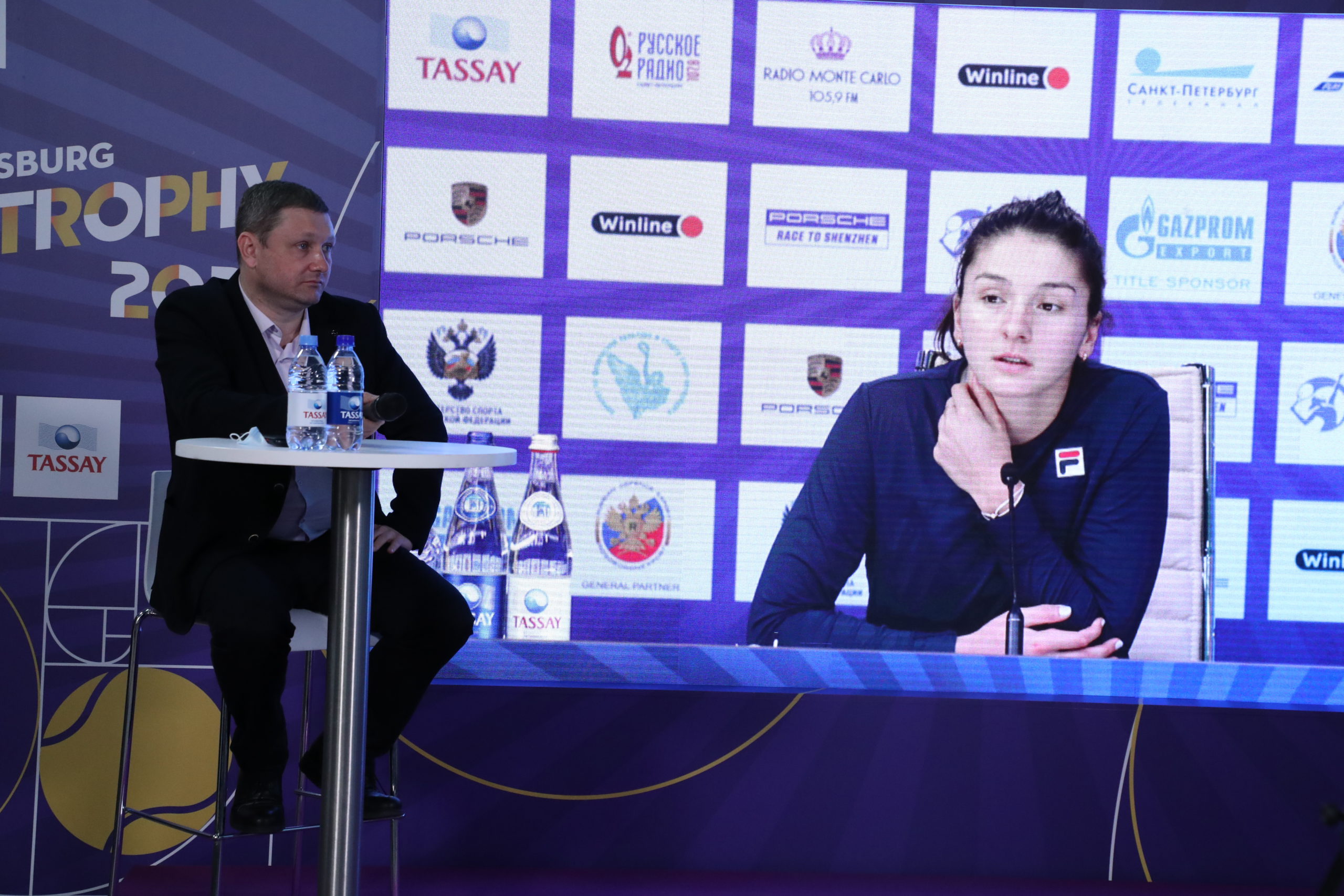 – So that decision was not easy for you? Yet, you started the second set well, made a break, then served and then you withdrew.

– I thought that the painkiller pill they gave me would work – an anesthetic pill. I thought that it would be a little easier for me to play, but, unfortunately, the pain was still there and I decided not to make it worse.

– Can you call this tournament a success for you: you reached the finals, earned some points and, last but not least, some good prize money – quite important for a tennis player, because tennis is an expensive kind of sport. How do you assess all of this?

– Of course, it was a great week for me, I am very glad that I played so many matches. I haven’t played as many matches as I did during this tournament for a long time. I was playing on center court, almost at home, and there were fans on the stands. Today there was almost full stadium, it’s just incredible because I think that probably all the players have already missed the fans on the stands. I am very happy with this result, no matter what.

– You are a young girl, but by tennis standards, an experienced player, a mature one. We know that your coaches have changed. But today, on the court, you personally thanked both Sergey Betov and Mikhail Elgin. Can we say that this is already a strong and successful team, and you will not look for someone else?

– I will not look for anyone. I’ll probably even say if something doesn’t work out for me, I don’t want to work with any other coach. We will try with Sergey (Betov) to achieve results, we will invite Mikhail (Elgin), he helped us a lot during this week. And then we will see what happens.

– What exactly does Mikhail Elgin bring to your team? We know him as a good doubles player, he has a great one-handed backhand and a strong serve. How does he help you?

– Since Sergei and I are always together, Mikhail can see what Sergei sometimes does not see. We all communicate very well together. Mikhail can always tell me something important and necessary. That is why our cool team worked great. 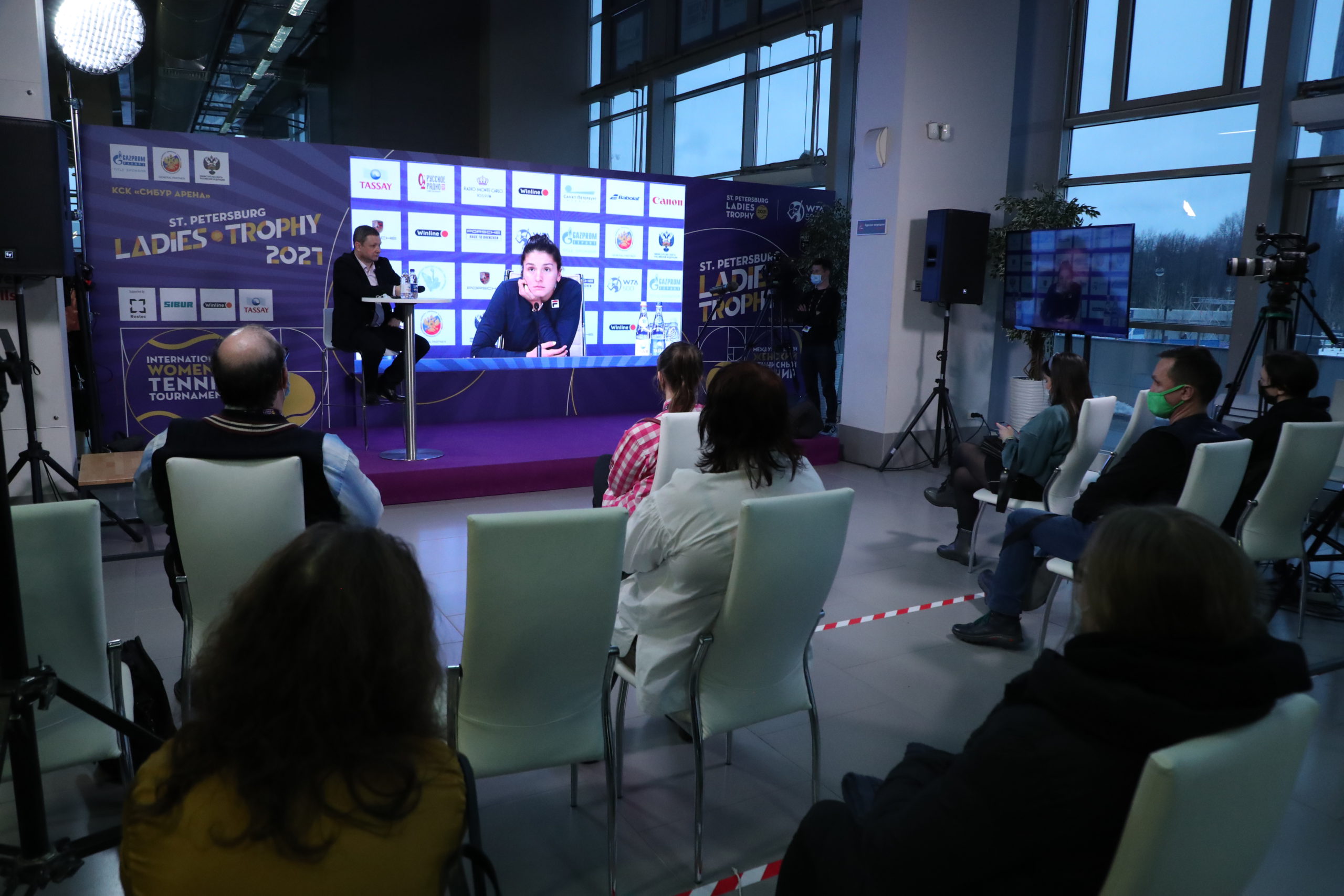 – You are already at least the second Russian player who has formed a successful tandem with the Belarusian coach. Aslan Karatsev is working with a Belorussian coach at the moment and we can see the results of their work: the semifinals of the Australian Open and the victory in Dubai. And you have successful season as well. How can you explain such a fruitful combination of Belorussian and Russian tennis?

– I don’t know for how long Aslan has been working with his coach (a little over than a year). I only know that Yahor (Yatsyk) helped him a lot and believed in him when everyone had already given up on him. And Aslan is playing just amazingly now. He has an incredible level of the game. I watched a couple of his matches and, of course, his ball flies very fast. I think it will be difficult for many players to beat him now.

– You say your lower back hurt. How will this affect your plans for the future and what will you do next?

– I have already withdrawn from the tournament in Miami, I will not fly there. So I have plenty of time to recover.

– If we are talking about Mikhail Elgin, was it Sergey who suggested and invited him to coach and help you at this tournament? After all, they are well acquainted, and they played together many times before.

– Yes, that’s right, they played together before. They played in doubles. They are very good friends. Mikhail Elgin lives in St. Petersburg, so we decided to invite him.

– Will you invite him to other tournaments?

– I don’t know yet, because as far as I know he has a job. He works with a guy in the USA. But as he doesn’t have an American visa yet, he is still here in St. Petersburg. We will discuss it later with him if we are going to work together in future.

– As you have time to recover now, are you planning to play a clay part of the season? And what will be your next tournament?

– Of course, I’m planning to play the clay season. The first tournament most likely will be in Istanbul.

– Of course, it was a very sad moment for me. I am upset that I couldn’t complete this match – especially because it was the finals. But I have to think about my health, I have to recover and get back in good physical shape.

– Despite the fact that you had to withdraw from the final match, what are you most proud of after this week?

– I am proud of the way I played. I showed that I can play well, so now I just want to keep this level and continue to play at this level.

– You were thanking everyone on the court for a long time, and it felt like you were afraid to forget someone. And you spoke very warmly about your parents. How will you thank them – will you maybe bring some kind of souvenir from St. Petersburg? In this regard, there are many things to bring and show.

– Yes, that’s for sure. In general, my parents are actually just waiting for me to go home as soon as possible, and in general they just want me to come and stay with them more often.

– So you are the best gift for them?

– Well, you can, of course, say that (laughter). Truth to be told, when I was on the court at the award ceremony, I thought: the main thing is not to forget to thank everyone! But I hope that I remembered everyone.